"There was something about the E♭ voicing that I liked. So it's absolutely, intentionally in E♭, not E"1

The quote above is from Smashing Pumpkins frontman Billy Corgan, about their most successful song, Today.

Can a large collection of live recordings and some simple automatic analysis tools help us understand the performance history of a song?

Thanks to the group's attitude to live recording and distribution, over 500 recordings on the Live Music Archive are labelled as being of Smashing Pumpkins concerts. Using work with Linked Open Data and audio analysis tools from CALMA and FAST projects, we can look at how a simple key-finding algorithm thinks this song has been played across 100 live recordings.

The graphic below shows this (click – preferably using the Chrome browser – for an interactive version). 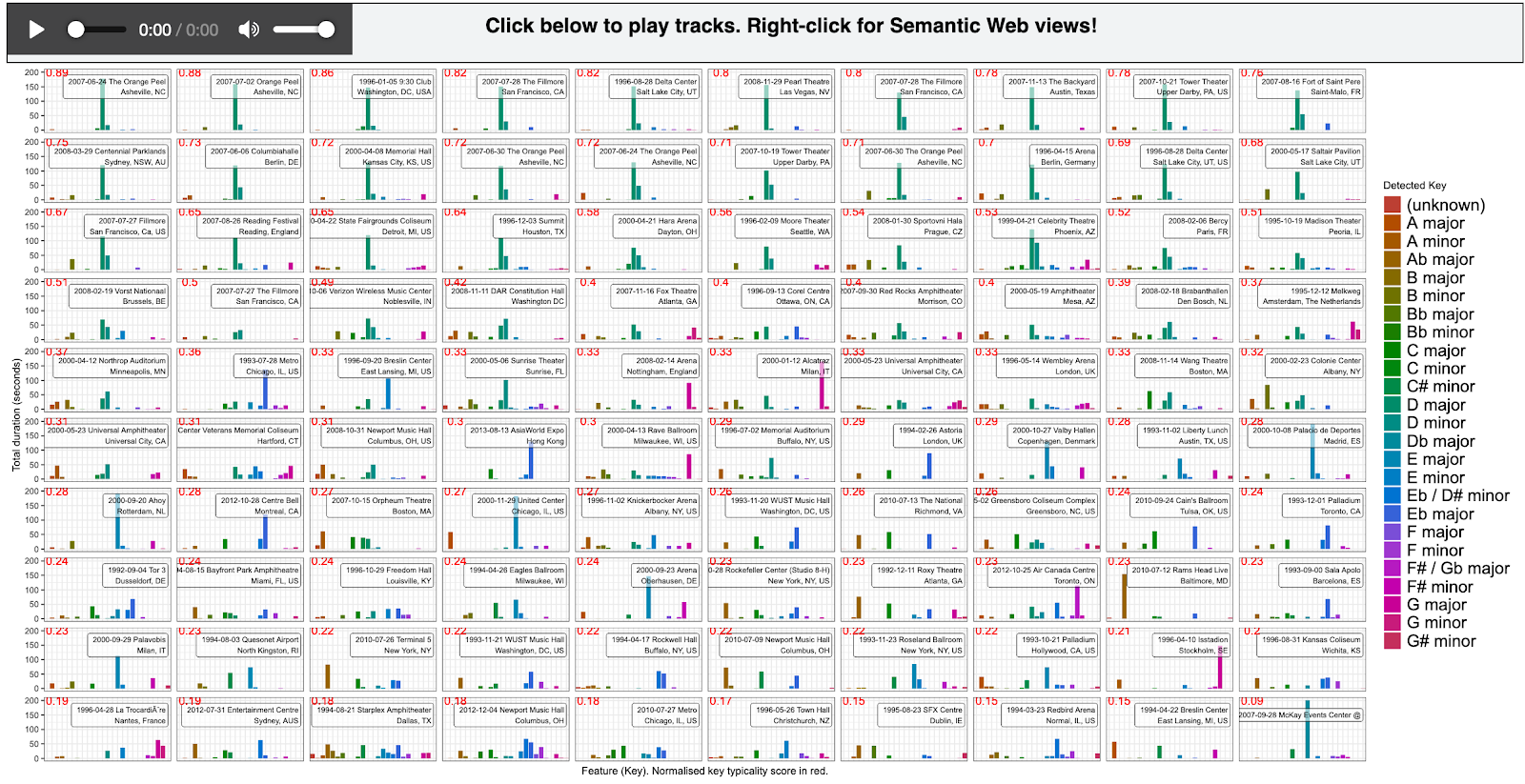 Each of the 100 graphs represents prevailing key distribution as detected by a simple key detector operating on the audio. The graphs are sorted (top left to bottom right) by a 'typicality' measure based on those distributions – so the first ones are the recordings that are most like all the others, at least in terms of key.

Key estimates are easily thrown off by noise, since this can add random detected pitches, which overwhelm the finer differences in pitch proportions that the detectors are looking for. Nonetheless, the first-ranked recording sounds like one might expect a typical Today to sound, and the last one has been mislabelled – it isn't Today at all.

And yet a few things are striking – the most typical recordings come from between 1996 and 2010. Performances from tours in the years following the 1993 single release or ones from 2010 onwards are much less 'typical'. Listen to some of these earlier or late recordings, and the noise levels are not obviously worse than higher-ranked versions. A good example is the AsiaWorld Expo recording, with a typicality of 0.3.

Plotting the most prominent detected key for the track against date of recording shows what's happening more clearly.

Even allowing for labelling errors, there's a visible difference. Between 1996 and 2010, Today is primarily performed sounding in D. Before and after, it's generally a semitone higher, matching Corgan's own description and the commercial recording.

Large-scale explorations and visualisations like this can help us frame musicological questions about performance practice. In the brief example above demonstrates why it is crucial to situate these computational approaches within additional musicological research, information and traditional archive research. There is so much musicological potential in resources like the Live Music Archive, it is vital to combine such methods for future understanding of musical practice.

The visualisations and tools used here are based heavily on work conceived and developed within the FAST project by Dr Kevin Page and lead developer Dr David Weigl, at the University of Oxford.