Répertoire International de Littérature Musicale (RILM) documents and disseminates music research worldwide. First published in 1967, the RILM Abstracts of Music Literature aims to provide a comprehensive, international bibliography of writings on music. It includes bibliographic information about each publication, along with an English-language abstract and indexing classification to support discovery. The resource includes monographs, articles, book chapters, exhibition catalogues and more, with over one million publications covered.

More recently, RILM has published full text for a subset of the publications in their abstracts database. As of July 2019, there were a little under 300,000 full-text records. In addition to creating this resource, RILM also publish the monumental German music encyclopedia Musik in Geschichte und Gegenwart (MGG) and the Index to Printed Music (IPM).

RILM presents an important resource both for discovering music-related writings and for understanding how the writing itself has developed. Publications are recorded not just with information such as the time, place and language of publication, but they are also given topic labels, and this provides an opportunity to explore the way in which the topics emerge in the writings of scholars and others.

If a publication is categorised with two topic labels (called index terms in RILM), this provides evidence that someone could write a coherent narrative that included both subjects – the topics were considered somewhat compatible. If more than one publication has the same pair of topic labels that increasingly suggests a degree of relatedness of those topics. One reason for this sort of 'relatedness' might be historical, for example topics related to Mozart and Haydn might often be applied to the same publications because the two composers were contemporaries and friends. Another reason might relate more to the nature of the academic discourse, for example medieval vocal music from the 'Notre Dame school' might be linked at certain times to topics related to architecture because of the way the period was commonly written about and because of the influence of art history on the discourse.

RILM provided us with samples drawn from a single year at ten-year intervals (1968, 1978, 1988, etc.), which we used as the basis for network visualisations to help make these relationships more tangible. The result is a form of topic map, grouping topics that are related by their co-occurrence in RILM entries.

These visualisations are included here as a series of images:

and in this video:

Although topic-based network analysis produces interesting results, a more explicit relationship inherent in scholarly writing can be seen in citation patterns. When a writer refers to the work of another, even to criticise it, that represents a connection that might be related to the topic, the philosophy of the writer, their community affiliations, and so on.

The RILM abstracts database does not explicitly hold information about citations, but where full text versions exist, they do often hold structured bibliographies from which this could be extracted. Connecting the entries in bibliographies to records in RILM is not a simple task, since the titles, personal names and bibliographic details from the full text can differ from the standardised forms used in RILM's records. SALT, a tool devised at the Oxford e-Research Centre, supports matching records such as these using not only the textual content of fields, but also any available contextual information.

The tool requires information published as Linked Data. We supported RILM in producing a Linked Data export of a subset of their records and loaded them into Salt to simplify the matching process. 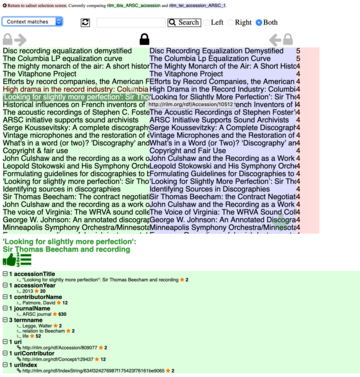 We are grateful for the support, advice and enthusiasm of all the staff at RILM, particularly Barbara Dobbs Mackenzie RILM’s Editor-in-chief, and Yun Fan and Andrew Horwitz for the collaboration to create the RDF data required for SALT.